One is an illegal drug found in marijuana while the other is marketed as a safe herbal alternative. But the claimed differences between them are not supported by science, reports a group of UConn researchers Nov. 1 in Drug and Alcohol Dependence.

Tetrahydrocannabinol, or THC, is the psychoactive compound produced by cannabis plants. The federal government lists Δ9-THC (pronounced delta-9-THC) on the Schedule 1 list of dangerous drugs with no accepted medical use. But other versions of THC that differ only in the location of a double bond, such as Δ8-THC, quietly remain quasi-legal at the federal level.

Delta-8-THC differs from Delta-9-THC simply by the position of a double bond (pink). Credit: Vortioxetine (see link at bottom of story.) 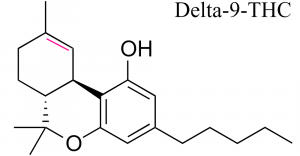 Differences in legality between different versions of THC cause conflict between the hemp and cannabis industries. There is also potential for harm to consumers. Although Δ8-THC is considered an herbal hemp extract, many manufacturers use solvents and chemical processes that can leave harmful residues in the product, and there are no standards for purity or safety. . Because there are no limits, some products contain ridiculously high levels of ∆8 and other THC variants that could potentially cause harm due to dosage. And states disagree on its safety or legality. Some states, like Connecticut, have made Δ8-THC as controlled as Δ9-THC, while in others it remains legal. Cannabis producers allege that the distinction results in unfair competition between the hemp and marijuana markets.

If the regulation of Δ9-THC as an illegal drug is based on the fact that it has physical and psychoactive effects, then the first step towards rational regulation of Δ8-THC would be to determine whether it also has these effects. And people who have experience with both say it does; most agree that the effects of Δ8 are similar to Δ9.

Steve Kinsey, professor at the UConn School of Nursing and director of the Center for Advancement in Managing Pain, Olivia Vanegas, graduate student, and their colleagues at UConn Chemistry and local startup 3BC Inc decided to test this on mice. Research done in Japan in the 1980s showed that Δ8-THC produced the same effects in mice as Δ9-THC. Kinsey and Vanegas replicated this work and found it to be true: mice given Δ8 became lethargic, their body temperature dropped, and they became cataleptic, meaning the researchers could place the mice in unusual positions and they stayed like that for several seconds. , which is common in THC-treated mice, but not in normal mice.

Then the researchers took it a step further by blocking the mice’s THC receptors. The blocked mice had no reaction to Δ8-THC, which clearly shows that Δ8 interacts with the same receptors as Δ9-THC.

Next, the researchers took a group of mice and gave them Δ8-THC twice a day for five days. Over time, the mice became numb to it. And when they were then given the THC blocker, the mice acted as if they were in withdrawal.

Finally, collaborators at RTI International conducted an experiment “asking” mice how the drug felt. They first trained the mice to travel to a specific location for a reward if given a dose of Δ9-THC. After training, the mice received a dose of Δ8-THC. Unsurprisingly, they traveled to the same reward point as when they received a dose of Δ9.

“So they’re telling us the same thing people buying the products at gas stations are telling us: Δ8 looks like THC,” Kinsey says.

Chemically, this is not surprising. Molecules as similar as Δ8- and Δ9-THC generally (but not always) act the same in the body. But legally, this leads to a lot of complications.

The distinction between Δ8- and Δ9- originated from the Congressional Farm Bill covering the cultivation and sales of hemp. Hemp is defined as a cannabis plant containing less than 0.3% Δ9-THC by dry weight. Anything with more concentrated Δ9-THC than that is considered marijuana. Additionally, the Farm Bill has declared anything else naturally present in the hemp plant to be legal. This includes Δ8-THC.

“It creates a tussle between marijuana and hemp growers,” says John Harloe, an attorney for the Colorado THC Task Force. Products classified as marijuana “must be sold in dispensaries and pay high taxes, while hemp growers can sell essentially the same product but without the same regulations, due to the ambiguity of the Farm Bill,” says Harloe.

Harloe brings Kinsey and Vanegas’ paper to the Colorado task force to inform the discussion. The task force is trying to create appropriate regulations that will address the different chemical variations of THC and protect public safety without crippling the hemp industry. The paper is particularly valuable because there is so little research done on THC and its intoxicating effects, due to federal rules.

“Any scientific element will have an influence,” says Harloe.

Vinyl market The research report is generated using integrated approaches and latest technologies for the best results. This Industry Analysis Report reveals general market conditions, trends, inclinations, key players, opportunities, geographical analysis, and many other parameters about the DBMR industry that help guide the business in the right direction. The information provided in this market […]

A new update for Gloria Victis is available for download. Update 332 introduces changes to the liquor system. This update also brings quality of life improvements and bug fixes. Drinks are now divided into three different categories: Craftsmen, Warriors, and Potions. The change should improve everyone’s use cases, and hopefully players will benefit from the […]

Washington, DC is one of the few places in the United States that uses pure contributory negligence law. washington d.c. – The legal drinking limit is 21 in Washington, DC, so a driver under that age cannot have alcohol in their system. For adult drivers, the drinking and driving law is very complicated and distinguishes […]